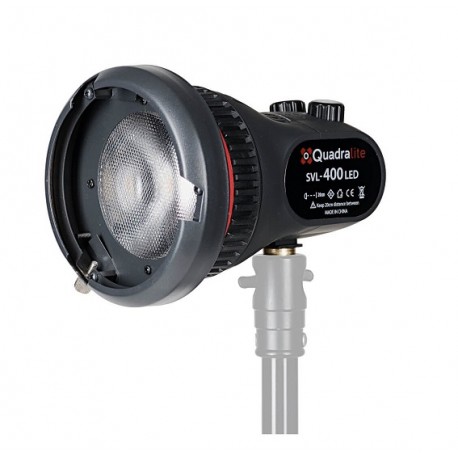 Quadralite SVL-400 LED is an extremely lightweight and quiet lamp based on LEDs. With 40W power, the device can be easily used not only in photography but also on small film sets. COB LEDs guarantee a stable stream of light, which is characterised by high colour rendering index (CRI≥96,3) and colour temperature close to sunlight (5800K). The fresnel lens with adjustable range allows you to adjust the light beam in the range from 15 to 40 degrees. The
universal Bowens mount will provide the possibility of using various light modifiers such as reflectors, softboxes and gates, allowing for even better effects during the session. The built-in cooling system protects the equipment
from overheating, allowing you to use the lamp for a longer period, and the quiet operation of the fan will not interfere with the sound recording process during filming. Another important feature is the lifespan of the LED used in the
lamp, which reaches 50,000 h which is the equivalent of over 5.5 years of continuous operation. The small casing and low weight make it possible to take the lamp with you on every session.